Thanks to Button Shy Games for providing a preproduction review copy of this game.

In the Czech Republic, in the town of Kutná Hora, there is an abbey called Sedlec Abbey. In the basement of the Abbey is an ossuary. And in that ossuary is an enormous chandelier made entirely of human bones.

Morbid as this is, there’s actually a pretty fascinating history behind it. In the 13th century, Abbot Henry returned from a sojourn to the Holy Land and spread some dirt he had gathered from Jerusalem on the burial grounds outside of Sedlec Abbey. This greatly increased the number of people who wanted to be buried there. Following the Black Plague, however, the cemetery was extremely overcrowded, and so many bones were exhumed and moved to the ossuary. A lot of that was done by a half-blind monk in the 16th century. And this is the setting of

Skulls of Sedlec is a game designed by Dustin Dobson that is for 1-3 players. It was a finalist in one of Button Shy’s 18-card contests they ran last year, one about real locations. It didn’t win, but apparently they still liked it enough to sign it. The game will be on Kickstarter in about a week. In the game, you are helping out the half-blind monk in exhuming graves and stacking skulls in a pleasing manner.

The 18 cards in the game each show two skulls of five different types – Royals, Romantics, Peasants, Priests, and Criminals. Each one has a different way to score, but we’ll get to that shortly.

At the start of the game, the cards are dealt into six different piles of three cards each, representing the cemetery. One card is flipped face up, and you’re ready to play. On your turn, you can do one of three things: Dig, Collect, or Stack.

COLLECT: Take a face up card. 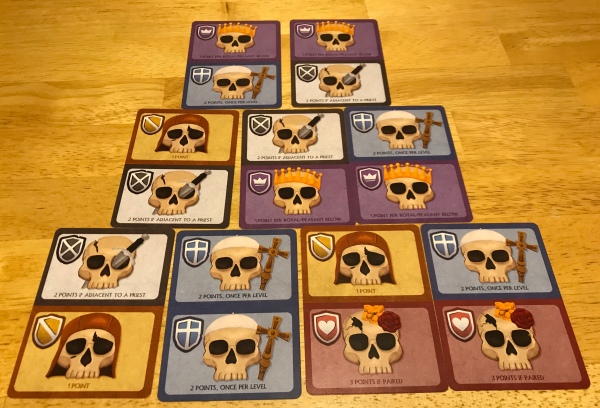 The game continues until all players have completed their pyramids. Then you score.

The player with the highest score wins. 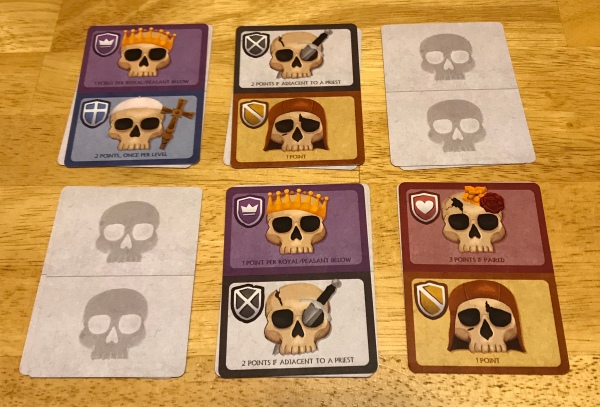 As per usual, I got a preproduction copy of Skulls, so stuff may change in the final version. However, Button Shy games are usually close to ready at the time of their Kickstarter campaigns, so what you’ve seen in these pictures is probably close to the final version. Cards are well laid out and you can definitely tell which type of skull is which. The most confusing layout thing is that the Romantic skulls have text that say they are worth three points if next to another Romantic, while the rules say that the pair is worth six points. I don’t know which way is better, but it does make you stop and think for a minute. Otherwise, the cards are good.

Thematically, I absolutely love that this game made me learn about Sedlec Ossuary. It’s not a theme that is strictly necessary for game play, but as a framing device, it works really well. There’s a certain amount of abstraction – in truth, skulls don’t care where they are placed – but it’s interesting to think that this is based on a real place where this kind of thing really happened. Which I know was the point of the Button Shy “games based on real places” contest.

Ultimately, this is a card drafting game where you’re trying to get the right cards into your pyramid in the right position in order to score maximum points. The drafting happens in the cemetery, with six piles of unknown cards. You don’t necessarily know what you’re drafting – some cards may be face up, but if you choose to do the Dig action, you’ll be flipping up random cards and having to take one of those. This is good if you’re searching for a Priest to go with your Criminal, or that elusive second Romantic, but it can be a risk. Still, it’s a novel and thematically appropriate mechanism for drafting cards.

Once in your hand, you have to get cards into your pyramid. The two-card hand limit forces you to do that throughout the game – no getting nine cards in your hand and then arranging them however you want. You have to roll with the punches in this game, and if you have two cards that you don’t really want to play yet, that’s tough. In one sense, I am quite annoyed by the two-card hand limit, but in another stronger sense, I recognize its necessity and how it makes the game a little thinkier. As does having to build from the bottom up – if you have a Royal on the bottom of your card, you don’t really want it on the first floor, but you have to build four more cards before you can get it higher.

The game plays very fast – you can get through a teach and a play in ten minutes, at which point you might want to play again. The game is pretty replayable in its speed, and in its tactical nature as you’re trying to figure out the best way to score points based on the cards you have available.

Skulls is a 2-3 player game (with a solo variant), which is entirely appropriate, especially since there are only 18 cards. This means everyone can have the same size pyramid (9 or 6 cards). With four players, it would be 4 card pyramids with two cards left over, which wouldn’t work. That said, I could see this game being expanded out to a much larger game, with different kinds of skulls available and the ability to build bigger pyramids.

IS IT BUZZWORTHY? I really like this game. It’s got a nice simple ruleset, engaging gameplay, and an extremely unique theme that clued me in to something that is out there in the real world. I now need to make my own pilgrimage to Sedlec Ossuary, and maybe I’ll take this game along with me.

Be sure to check Skulls of Sedlec out when it goes live on Kickstarter on March 17 (EDIT: It’s live!). Thanks again to Button Shy Games for providing a preproduction review copy of this game, and thanks to you for reading.

This site uses Akismet to reduce spam. Learn how your comment data is processed.